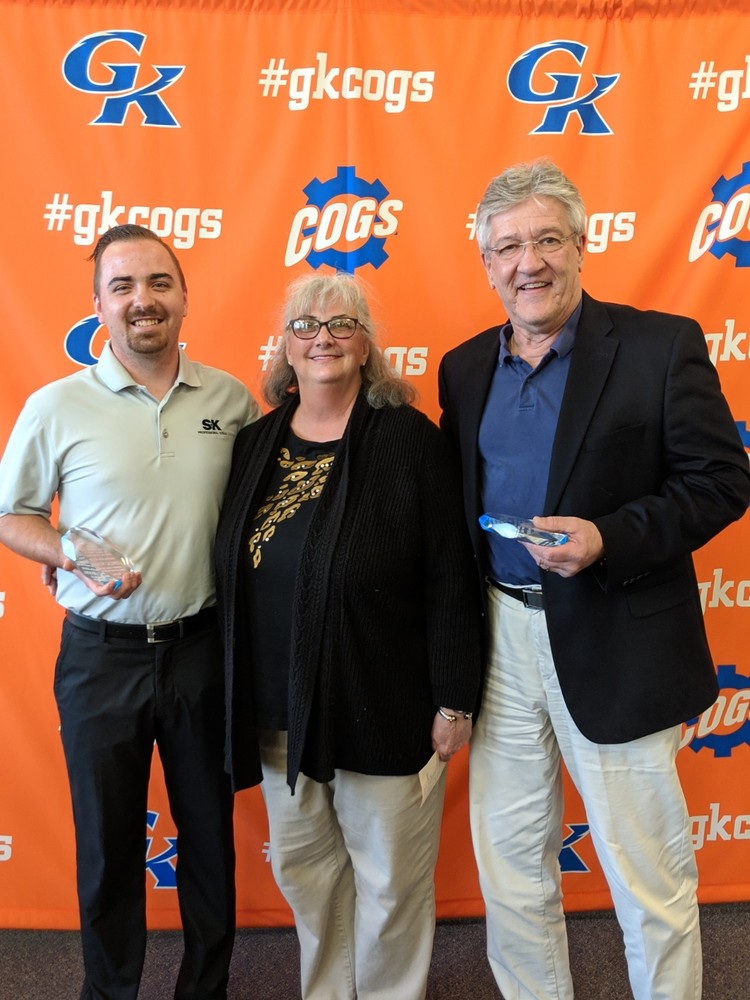 Prior to the April 23rd Board of Education Meeting, a ceremony was held to celebrate the contributions of four exceptional individuals to the Genoa-Kingston School District.  Last year, the Board approved the establishment of the Nikki Gudall Volunteer Appreciation Award in honor of the award's first recipient.  Nikki was a loving, selfless person who saw the good in everyone around her.  Unfortunately, Nikki lost her long battle with cancer prior to this year's ceremony.  Yet her presence was still evident with the attendance of her husband Darrell, her two sons Hunter and Christian, her mother Barbara Helenbach, and her mother and father in laws Arlene and Mike Gudall.  This year's honorees certainly represent the same dedication and caring Nikki did while helping in the district and in the community.

We began the ceremony with high school principal Angelo Lekkas introducing Mr. Tom Rucker who nominated "Papa" John Elko.  Papa John can be found helping at EVERY music and/or band event.  He is the first to arrive, and the last to leave.  Thanks Papa John for your love and caring for our students!

Next. middle school principal Craig Butcher welcomed Carol Henken as she introduced the first of her two nominees, Andrew Caldwell.  Mrs. Henken explained that Andrew was committed to sharing his live experiences with Mrs. Henken's classes in an effort to share how tough it can be to get ahead in life, and how life presents very difficult decisions.  Specifically, Andrew earned a scholarship to play baseball in college, but when he found out how much student loan debt he would accrue, he made the difficult decision to give up the dream he had worked so hard for, and take a more practical path by attending junior college, and graduating with a degree completely debt free.

Mrs. Henken then recognized and thanked Chance Franckowiak who unfortunately was unable to attend the event due to his commitment to his college coursework.  Chance's father Mike received the award in his stead.  Chance's story is very similar to Andrew's in that Chance realized in high school that to do what he wanted to do after high school, he had to give up something he was passionate about: high school football.  Chance also shares with Mrs. Henken's classes the difficult decisions he had to make to get to where he wanted to be.  Chance is currently attending NIU, and working toward that dream of becoming an engineer.

Last but not least, we honored Jen Creadon.  Jen was nominated by BOTH Mrs.Stefanie Hill at Kingston Elementary School, and Mr. John Francis at Genoa Elementary School.  Jen somehow finds time to decorate bulletin boards, file paperwork, organize book rooms, and whatever else needs to be done at BOTH KES and GES!!  Both building administrators were so proud of the work that she does, and the teachers present to support her could not be more thankful for the workload that she takes on for them, allowing them to spend more time improving instruction and educating students.

Genoa-Kingston School District is blessed with many individuals that pour their heart and soul into making this district and this community what it is today.  We are proud to have these volunteers working with our teachers and our students!!!